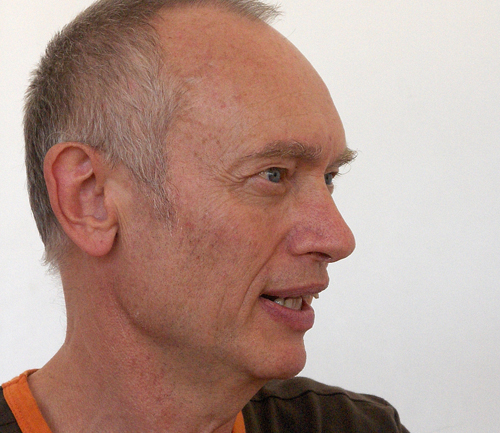 Since 1979 he has been studying and practicing  Contact Improvisation, movement theatre and New Dance, amongst others with Laurie Booth, Nancy Stark Smith, Julyen Hamilton, Ruth Zaporah, G.H. Soto, as well as at the Naropa Institute Boulder (USA). He did studies in Aikido, Capoeira, Tai Chi and other martial arts, he is cofounder of bewegungs-art freiburg and since 1995 ceritificated teacher of Feldenkrais Method®.

His work centers around dance- and Contact Improvisation and – influenced by Feldenkrais Method® – a movement-training, which utilizes and enhances the intelligence of the body. It incorporates principles of the martial arts and regards dance as movements in their most variable manifestations. Mainly in the 80ies he has contributed essentially to the development of Contact Improvisation in Germany.

Bernd Ka danced in various formations with Lilo Stahl and Wolfgang Graf, with Jazz-musicians, as well as at Dance Butter Tokyo led by Anzu Furukawa (Japan) and at Alternating Currents – a group of known improvisers from USA and Europe. In the 90ies he workes with several own ensembles.